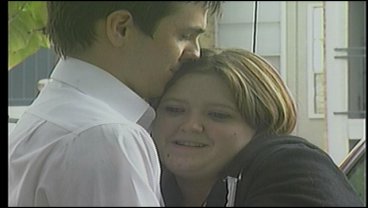 A 19-year-old woman was struck by lighting last night as she was leaving work.  Friday, she shared her incredible story with Deeda Payton.

Five o'clock Thursday afternoon lightning struck.  "We were in the back of the building and heard it hit the building. I mean everybody screamed. It was that loud and we knew it had hit something we just didn't know it had hit somebody, or my kid!."

19-year-old Lauren Burchett had survived a lightning strike. "My first immediate thought was I've heard about people getting struck by lightning and their heart stops so my initial reaction was I need to get inside." "She had to stagger in because nothing was quite working like she wanted it to, but she knew she needed to get inside."

Her mother then rushed her to the hospital. "When you hear someone struck by lightning, you think of the worst." "I was wondering if I was ever going to get to see or hold her again."

Her boyfriend says it was a relief to see her alive. "It was initial shock. Felt like electric current was running through my body. Just really tingly."

"Did you ever think you were going to die?" "Yes." Doctors say Lauren is lucky to be alive. Other than soreness on the right side of her body, she is completely healthy. But, this is an electrifying experience she won't soon forget. "It makes you more scared to go outside during a storm, I've never been scared of lightning, so now its like...you know when you step outside I'm like am I going to be struck by lighting.

Lauren says she saw a white flash when she was struck and describes the feeling as a hundred times worse than being shocked. Although, she says it was not the most painful thing she has survived. And, she has no burns or marks anywhere on her body.