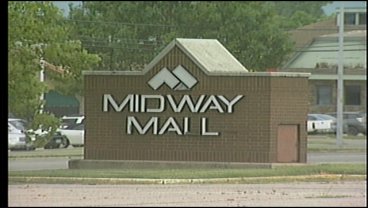 Simon, the mall owner, has actually contracted CBL and Associates to take over all management, leasing and marketing for the mall -- A place that has seen the departure of several businesses in recent years.

In a cash-deprived economy, CBL promises to meet the markets demands for Midway Mall. The market, though, has taken a toll on the retail industry. And, Midway Mall is no exception.

"It's still a fun place to come and hang out, but it's gone down hill from what I've seen in the past years," says Jacob Reeves, a shopper.

Adds Jodey, another shopper: "I believe it's just the local economy and the creation of the new trip center over off of (Highway) 75 probably."

Tucked in between Sherman and Denison, at the intersection of Texoma Parkway, the 471,000 square-foot mall competes with the Sherman Town Center.

The boarded up windows and doors have become more and more common in and around Midway Mall. And, shoppers can't help but take notice.

"It's kind of in sad shape right now," says Jodey. "I'd like to see it come back for sure."

Adds Reeves: "Right now, it's kind of bland -- there's not really much in it at all. A lot of stuff needs to be added to keep people coming."

Empty, gated stores now take the place of businesses, such as new York and company, the arcade and food vendors.

Details on which direction the company will go are unclear. But, CBL's president, Stephen Lebovitz, did issue this statement:

"This is a great opportunity for CBL to use our expertise to enhance the performance level and overall shopping experience at the center."

It's a statement that signifies change and hope for shoppers who frequent the center.

"We'd like for the mall to improve and get more stores so that we have more shopping, and we come here at least twice a week," says Gejuan Raines, who likes to shop a lot.

The new management company met Thursday with tenants at the center.

Officials would not comment on camera because they told us the transition is still to early in the making.