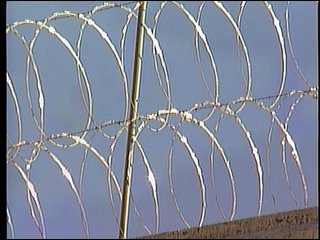 GRAYSON CO., TX - The bond election concerning the Grayson County jail will not happen and it comes down to a technicality. CLEAT, the largest police association in Texas, says the county violated the Open Meetings Act for the August 31st meeting, by posting the agenda one minute late. And now everything that happened at that meeting is void. So what happens next? KTEN's Katy Blakey has more.

There's a number of things that could happen next. Residents could see a special election called or the county could just go through with the private option and abandon the bond vote all together. County Judge Drue Bynum says he's looking at those options now.

He says it's unlikely a special election could be called before November 3rd. It will have to be after it and that's a big "if".

A special election can cost several thousands of dollars. The county and the city also partnered on Monday to revisit studies concerning re-modeling the downtown facility. Does that still happen with no set bond vote? The judge says he'll have to talk with city leaders and commissioners over the matter.

There's also the question over should the county just go through with the private option?

The Texas Commission on Jail Standards has allowed the county a 49-bed variance and have suggested that variance will be taken away if the county doesn't resolve their jail issues soon and the county will be forced to pay to house inmates out of the county.

"If there's no election and if we chose to not go forward with privatization, then the only other option would be to call for a general obligation bond election at a later date, which we're still looking at what that date would be. It's important to note that if that bond election failed, then we are right back where we were when I took office over 2 years ago."

Sherman's Mayor Bill Magers has been a big supporter of renovating the current jail downtown, and says he'll view this latest development as an opportunity.

"The vagueness of that bond election was doomed to fail," said Mayor Bill Magers to KTEN over the phone. "I think this gives us more time to seriously look at other less expensive downtown options." He added, he looks forward to working with the commissioner's court on the project.

Judge Bynum says he hopes to have some of those big questions answered at Monday's commissioners' meeting. The agenda for that meeting should be posted by 10am Friday morning.