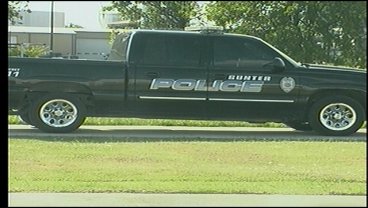 Gunter Mayor Mark Millar says that there is an on-going FBI investigation involving the former Gunter police chief but at this point it has nothing to do with his department and he's ready to focus on finding a replacement.

"We want to make this as quick as possible because we only have one officer," says Mayor Millar.

That's one officer to patrol a town of 1,500 residents.

"We normally have three and Monday night were having a council meeting we'll make our decision there," says Mayor Millar.

In the interim, the one Gunter police officer, Julie Steenbergen, will be the acting police chief.
Mayor Mark Millar says they've called in extra manpower from the Grayson County Sheriff's Department to be on-call when officer Steenbargen is off duty, something the mayor and residents aren't too concerned about.

"She'll do a good job--they've had one police officer in years past--Gunter's grown a little but it's not a raging metropolis--not a lot of crime either so they'll get by," says Jerry Britt.

As for why former Chief Thomas resigned, the mayor says Thomas has had enough with the rumors surrounding a tasing incident that happened earlier this year.

"Really and truly right now it's just an investigation and until it escalates from that point--I really have no way to comment," says the mayor.

The mayor also said that the Gunter Police Department as well as the Texas Rangers investigated an incident that happened earlier this year that involved Police Chief Thomas tasing two males already handcuffed both departments found no wrong-doing.

"It's one of those things that we'll just wait and see what the FBI says but at this point as far as we're concerned it's a moot point because he doesn't work here anymore--I wish him the best," says Mayor Millar.

And residents seem to feel the same way:

"I talked to him a lot, he seemed like a pretty nice guy, had a good head on his shoulders--I hate to see him go like this," says Larry Gorondy, a Gunter resident.

They do plan to name a new police chief as soon as next Monday night's council meeting and at that point they'll look into hiring another officer to patrol the streets.