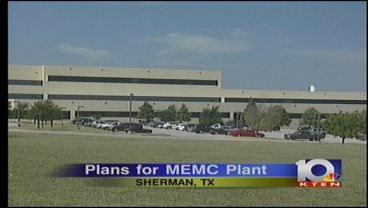 MEMC is shutting down it's Sherman plant in 2011 laying off some 200 people. But, what about the facility itself? It's one of the first companies you see as you enter Sherman on highway 75. Deeda Payton spoke to the Sherman Economic Development Corporation today about plans to sell the building to another company.

This whole compound will be vacated in just 18 months. The challenge now is to find a company to move in and not only bring in new job opportunities, but also prevent this building from becoming an eye sore off of the highway.

MEMC began construction in 1995. It opened in '97. SEDCO says the 12-year-old building is filled with resources that many companies are currently looking for, so they are optimistic that they will be able to find a good buyer. They have already begun the process of talking to real estate brokers and other clients about the plant. And, they have the next year and half to search before it officially shuts down. There is also the chance that a similar plant will come in and absorb some of the 200 displaced workers.  "Whenever a major employer closes it's going to have a major impact on the community. What we are going to try to do is find someone who will work hard to mitigate that impact. Bring in someone who will utilize the skill sets of the employees that are there and utilize the resource that the facility brings to the community."

SEDCO says even if the building goes vacant in 2011, it will still be maintained. MEMC will continue it's upkeep as it tries to sell the facility, so SEDCO is not worried about the prospect of an eye sore developing.