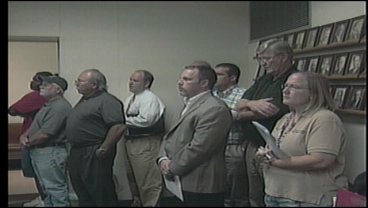 A special meeting of the Ardmore Mayor and Board of Commissioners has been called for Friday (9/11) to consider "possible action to enter into executive session to discuss the current employment status of the City Manager, Dan Parrott, including discussion of the possible separation of that relationship; and any severance payment, separation agreement and/or contractual obligations arising out of the possible separation of the employment relationship as authorized by 25 O.S. §307 (B) (1)."

KTEN News spoke with Dan Parrott live, on-air during KTEN News at 5PM. When asked if he was resigning, Parrott stated he is not resigning as of right now.

Tuesday night was the long awaited city commission meeting in Ardmore where groups for and against City Manager Dan Parrott were supposed to speak for 5 minutes each on where they stand, but neither side had a chance to speak.  Meredith Saldana explains.

It was standing room only at the city commission meeting where residents turned out to hear both sides for and against City Manager Dan Parrott.

But within a matter of minutes the issue was tabled and rescheduled for next week.

Lenzi McBride, daughter of Citizens Response Committee Spokesman John Beene, says, "We had submitted a request on Friday afternoon for the issue to be tabled until my father gets back.  He's actually the spokesman for the CRC. We had submitted it on Friday did not get a response so we were hoping they would postpone it for us and we're grateful that they did."

McBride told commissioners her father is currently in England visiting a sick family member and will not return until Thursday.

He found out after landing in England that the group would in fact be able to voice their opinion at Tuesday night's meeting.

His daughter says the group has over 1,000 signatures on their petition and she went to Tuesday night's meeting prepared to speak on behalf of the group if need be.

"If they had made us speak we were ready to proceed.  I mean I don't feel like it would have carried as much weight.  My father actually worked under Dan Parrott for several years as (police) chief and assistant chief for many years before that so we kind of figured who better to deliver the message than someone who's actually worked with him.  So, we were just happy that they let us table it."

Randy Libey, who was fired by Parrott several years ago wasn't as happy, "I'm a little sad by that because I was really looking forward to hearing both sides of the story tonight."

Ardmore attorney Glen Burns is the spokesperson for the group petitioning in favor of keeping Dan Parrott as City Manager.

Burns says, "He is as good as we've had in the last 4 and I've been able to evaluate every single one of them on many projects."

Burns told us he's not sure how many signatures the group has on their petition but he plans on speaking out for Parrott next week.

"I just plan to be here and explain to the commission exactly what I see in our city manager and ask them to make a decision based on all that they know about him.  I mean there's nobody in there that knows the city manager better than the city commission."

Mayor Martin Dyer tells me that next week each side will still only be allowed one spokesperson to speak on behalf of the group.

However this time they will be allotted 10 minutes instead of 5.

The meeting is set for next Monday the 14th at city hall and it will start at 5pm.