Another Study for the Current Grayson County Jail 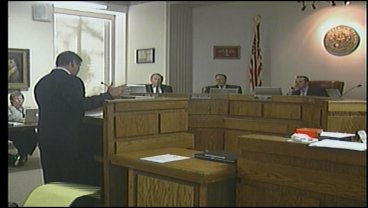 New developments concerning the Grayson County Jail. Sherman City Council members have voted to help pay for another study on exactly how much a new or remodeled Grayson County Jail could cost. As Deeda Payton reports, it all comes down to taxdollars.

It's an issue that's going to voters November third. Grayson County Commissioners agreed to go back and revisit what's called the Wiginton Study. But, that will cost $40,000. Tuesday night, the Sherman City Council voted unanimously to pick up a fourth of the tab with the Sherman Economic Development Corporation paying up the rest.

It seems there are now two options in Grayson County, build a new jail or renovate the current jail. However, the November third ballot will only ask voters whether or not they approve a 34-million-dollar bond package. "The bond would be in place for 34 million. We don't have to spend that entire amount of money. We can spend the needed amount of money to get the job done, but if it comes in less than 34 million the wording on the ballot is perfectly ok."

In the meantime, the county has decided to revisit a 2002 jail capacity study to estimate the cost for remodeling or expanding the current downtown facility to meet future needs. "I think there seems to be this idea out there that we can renovate the downtown facility and meet the needs for the next 25 years for less money than 34 million. If we can that's great and I'll support that. Based on research and due diligence I've done I just don't think that's possible."

County Judge Drue Bynum and Commissioner Gene Short approved splitting the 40-thousand dollar cost to conduct the study with the City of Sherman. "Yes, I think it's a good decision. We've heard speculation on what the decisions are at the facility. This will put to rest those rumors about the downtown facility." "The county, City of Sherman, and SEDCO working together to take a look at the downtown option and that's all we ever asked for."

But now the questions is, will the study be completed in time for the November election. "That is a question I've got. That is a lot of information to compile before the November 3rd election." "No, I'm going to say no, I don't think so."

Commissioner David Whitlock voted against paying for the additional study. "I feel like if there is another feasibility study done it should be done by the city, not the county. We don't stand to gain from this at all I think it's not our responsibility to spend more county dollars."

Still, many are eager to weigh the two options. Mayor Bill Magers says "I'm looking forward to seeing the results of the study."