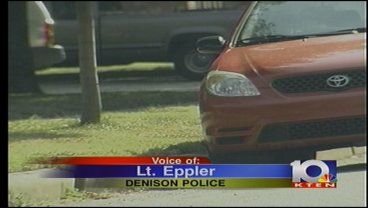 In Denison, officials say car burglaries come and go, but due to a recent wave of break-ins in the area officials want to remind residents to look their car doors.  Officers say burglars are looking for easy access to your valuable's.  Most seek out easy targets such as a window that is down, an unlocked door or a car parked in a remote area.  But the recent sting of burglaries, thieves broke into resident's cars parked right outside their home.

There have been a handful of car break-ins in Denison over the past few weeks.  In, Sherman at least two were reported.  In Durant, there were 12 break-in's over the weekend.  Officials want to remind you to keep your cars locked and make stealing as hard as possible for thieves.  Officials say you can do this by installing a car alarm, if it does not already have one.  Officals also suggest getting a dog, any noise will scare off burglars.

Tips for keeping your car safe: park in a well lit area, make sure to roll up your windows and lock your doors and never leave your valuables in plain view.  If you have to park on the side of the street, turn your wheels sharply toward the curb.  Also, consider etching your vin number in all of your vehicles windows.

Also, officials say look out for any unusual persons in your neighborhood and report any suspicious activities.