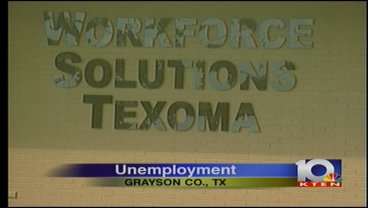 For Grayson, Bryan, Carter, and Pontotoc Counties, the Aug. numbers have not been reported as of yet. Officials expect these numbers to be reported in the next few weeks.

In July, Grayson co. saw a steady 8.6 percent jobless rate. The local Workforce Solutions anticipates a slight increase for August, but nothing residents should be too concerned about.

"We could see a little rise, however we have noticed that in the past few weeks, we've seen some hiring start to take place again in our region," said Bob Rhoden of Workforce Solutions.

He added that more job fairs could be an indication of a slight change.

"That's always encouraging when you see employers having job fairs and looking for employees that can give you and idea that maybe it might be bending back downward," Rhoden said.

In July, Carter county's jobless rate was at 5.7 percent. Bryan county's was at 5.3 percent, and Pontotoc county was slightly less at 5.1 percent.

Meanwhile, Grayson co. Workforce Solution's recommends for those actively searching for work, to keep updating resume material as well as welcome part-time work in hope of landing a full-time job.