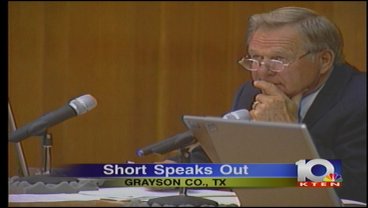 GRAYSON CO., TX - One county commissioner wants to keep the jail right where it is - downtown. KTEN's Katy Blakey met with Commissioner Gene Short about his reasons for voting "no" to the proposed bond package.

Commissioner Short was the only vote of dissent on Monday when the commissioners court voted to put the bond issue before voters. So, now he's working on another option for the court to pursue.

Instead of spending $34 million to build a new jail or letting a private company build a new jail, Short wants to keep the jail downtown and expand it. He plans to add another agenda item to next Monday's meeting. He wants an architect to draw up a "common sense" plan to renovate the jail. He thinks the county can spend far less money to renovate the facility than has been discussed in the past. He says the way the bond package is worded now, and the information provided, it's like giving a blank check to the county. He says a clear, definitive plan is a must before it goes to voters.

"That 34 million dollars, we don't know what the money will be spent on," said Short. "We don't know how many beds. We don't know the location of the jail. We don't have any plans or architect imaging of what the jail would look like."

Short also said he thinks a jail with around 550 beds would be sufficient for the county. As we've reported countless times, Judge Drue Bynum, Southwestern Correctional and the state say the county needs a 750 bed facility to meet long-term growth.

Coming up on KTEN News at 10, we break down those numbers and show you how in November of 2008 the Texas Commission on Jail Standards said 550 beds was fine, but six months later, that number shot up to 720.