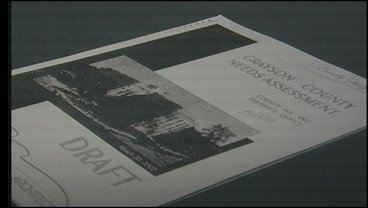 GRAYSON CO., TX - There are more plans to keep the Grayson County jail downtown. Voters will be faced with whether or not to approve a 34 million dollar bond package to build a new facility or renovate the existing one. KTEN's Katy Blakey sat down with Sherman's mayor and has more.

Sherman Mayor Bill Magers told KTEN he's glad County Judge Drue Bynum is open to other options and now he plans to work on a plan to keep the jail downtown.

At last Monday's meeting, Judge Bynum said he'd welcome any new proposals that called for building a new jail or renovating the existing one, but with stipulations. The plan can't exceed the cost of 34 million dollars and it must provide room for 750 inmates.

Magers says he's now talking to the author of a 2002 study that was done, commonly referred to as the Wigington Report. The goal is to revisit that study, update it, and see if keeping the jail downtown is feasible and cost effective.

"By moving the jail from downtown to a 90 acre track of land, you never know what can happen," said Magers. "It opens the door for the Justice Center to move [in the] long term. Short term, there are 40 employees who will move out of downtown. Our downtown is pretty vibrant, but you don't want to start messing with that because you don't know where it will end."

The mayor plans to take the matter before city council members and the commissioners court.