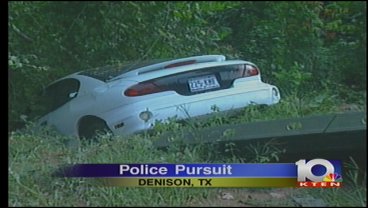 DENISON, TX -- This morning Grayson County officials were led on a short car and foot chase in Denison.  Police arrested Jerry Shawn Graham early this morning at Carpenters Bluff.  Police apprehended him by taser after he jumped from his rolling vehicle and took off into the woods.

Officers were conducting surveillance at a residence in East Denison where Graham was residing.  When officers approached his home with a warrant, he fled hitting a parked car and an unmarked vehicle sending officers diving to safety.

The warrant for his arrest stemmed from an aggravated assault after he threatened to kill his wife using a hammer, but his original parole violation was administered for manufacturing a controlled substance.

Graham, a confirmed member of the jail gang Aryan Brotherhood, is now facing charges of aggravated assault of a peace officer, criminal mischief of about $1,500 or more and fleeing the scene.

Graham has signed a waiver of extradition at the Bryan County jail and will be transported back to the Grayson County Jail.