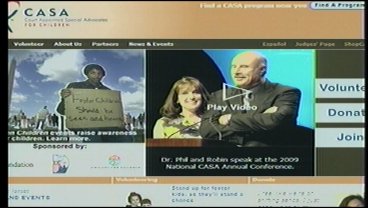 GRAYSON CO., TX -- Starting Sept. 1st Texas changed the law on strangulation from a misdeamor to a 3rd degree felony.

Strangulation is defined by cutting off air flow or ciculation to someone and is considered one of the most dangerous forms of physical abuse.

In August, over 60 reported cases of child, family, and dating abuse occurred in Grayson Co.

The Crisis and Intervention Center in Sherman says some victims don't even realize the danger of this type of abuse.

"When we see someone for the first time and we say you know if you've been strangled, your odds are much greater for much much more serious bodily harm... they're surprised because I guess it's a very well kept secret as to how dangerous it really is," said Executive Director Kathy Crenshaw.

As it stands, the crisis center estimates around 850 calls a year of reported abuse to women, children, and men.

One-third of these reported cases involve strangulation and that a victim of this abuse is nine times more likely to die than from other forms of abuse.

Crenshaw says she hopes through more awareness, more people will understand the dangers of this type of abuse.