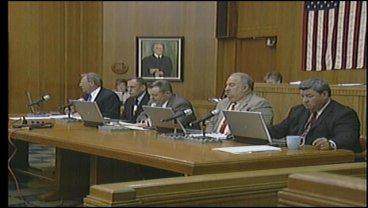 GRAYSON CO., TX - Come November Grayson County voters will decide whether they will foot the bill for a $34 million dollar new or renovated jail facility.

It was a complete turn-around for the Grayson County Commissioner's court, which has been pushing a private option for the past year. But, Judge Drue Bynum, said after a lot of thought it was time to let the people decide. But, now a lot of people are questioning if they really have a choice.

Ever since the court decided two months ago they were going ahead with the private option, residents, county leaders, surrounding city leaders have been saying this issue deserved to go to the voters. Now it does, and some people aren't happy about it.

Come November Grayson County voters will see this proposition on the ballot, "The issuance of $34,000,000 of Grayson County tax bonds for constructing, improving, renovating, equipping and acquiring land for county jail purposes and the levying of a tax payment thereof."

But Judge Drue Bynum says with this proposal comes a stipulation - the new jail or the existing one must have 750 beds, which he says fits the needs of the county over the next several years.

What has a lot of people upset, though, is they say the county doesn't need a 750 bed facility, that's too large, for the needs of the county and commissioners are setting this bond up to fail.

"I think it speaks for itself," said Judge Drue Bynum. "We've bent over backwards. This is a tough, tough proposition and endeavor we're taking. Sometimes when people say one thing and have to put their money where their mouth is, obviously, you get a different reaction and we saw that today. I will say the calls and emails I've gotten [people] are proud we're going to a vote of the people."

Grayson County resident Tony Beaverson has been an outspoken critic of the court and it's decision to precede with the private route. He told KTEN he was encouraged when he heard the court was taking the issue to the voters, but not when he learned the details.

"The people will vote on a bond issue with no substance, no particulars behind it," said Tony Beaverson. "[The Court is saying] just give us a blank check and with that blank check they can still do what they originally planed to do."

From now until November, the court is still going to precede with the private option. Monday morning they signed off a number of proposals with Southwest Correctional. Bynum says they are doing that, so in case the bond fails, they'll be ready to move forward with the private option because something has to be done quickly.