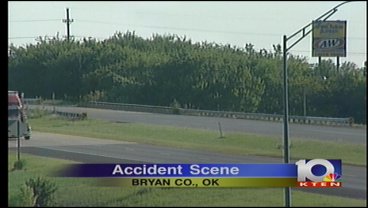 An update to an accident that happened over the weekend involving three Achille Seniors.  Lacey Gibby, Katelynn Ervin and Regan Christen were involved in a rollover accident after their vehicle swerved early Sunday morning to avoid another car carrying another senior classmate and an Achille graduate.  Officals say the girls overcorrected sending their car rolling several times.  All three girls were taken to the hospital.  Katelyn was treated for a burised lung, contusions and other lacerations; she was released the same day.  This morning, the two other teens are still recovering at Parkland in Dallas.  Lacie was treated for a borken arm and a hairline fracture to her pelvis and is expected to be released in the next couple of days.  Reagan is recovering from surgery after she received 22 staples and 300 stitches for a major head laceration, she also sustained a broken arm and leg laceration.

This morning their small class of 32 is continuing to pray for their recovery as the resume class as normal.

Authorities say the driver of the vehicle that swerved in front of the girls car was taken into custody, facing alcohol-related charges.  So far no charges have been filed.