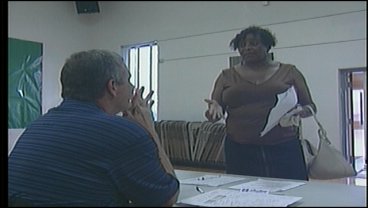 ARDMORE, OK -- A citizens group is gathering signatures on a petition, asking for the removal of City Manager Dan Parrott from office. KTEN's Jhen Kordela has our report from Ardmore.

"When you've got people waiting at the door for you to open -- waiting to sign -- I think that says a lot," says Shawna Dobson, who was boothing the petition.

All of their hands, ready to grab a pen and sign a petition that calls for the removal of the Ardmore City Manager Dan Parrott.

"I just don't feel good about the whole thing," says Lisa Fair, who signed the petition.

It's a petition that cites a lack of sound judgement, poor decision-making skills and ineffective leadership. It also notes a knowledge of problems within the Ardmore Police Department that Parrott reportedly did nothing about.

"There's some goings ons that need to be stopped," says John Beene, who retired as Ardmore's Police Chief in 2004. "And, the only way that can be stopped, and the root cause of it, is through the city manager."

But, to the people of Ardmore, this petition is about more than just one man's position. It's about questions that started with the Ardmore Police Department and how morale within the force translates to safety on the streets.

Then, accusations of favoritism, with some officers crossing the street to join the Sheriff's Department, and others claiming they, too, were forced out.

Adds James Fair, who signed the petition: "I think that for years, too many times, some of the people in this part of the county tend to do things the way they want to, and some people take and take and take."

Now, lines of signatures show some residents are taking a stand.

With Police Chief David Leonardo on paid administrative leave, city commissioners are planning to meet next Wednesday to discuss Parrott's future with the city.

We contacted Parrott yesterday about this petition. He told KTEN he had no comment on the matter but says residents do have the right to petition their government.