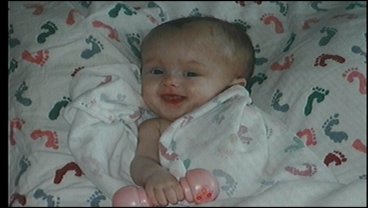 Mikayla Alford may be the toughest six month old you will ever meet and she has an entire community pulling for her and her family, but they still need your help. KTEN's Katy Blakey reports.

Mikayla Alford is smiling now, home after months of multiple surgeries and aggressive chemotherapy. Doctors discovered a cancerous tumor growing inside her brain when she was just a few weeks old.

Being a fighter is in her genes. Just two months before Mikayla Alford was born, her big brother, Hunter, got a positive prognosis. He was diagnosed with cancer at birth and after three years of surgery and hospital visits, doctors declared him cancer-free.

"I was so excited," said Ronald. "I couldn't have asked for a better Christmas and then it started all over again. It's been horrible."

So then, it was Mikayla's turn to fight. Doctors discovered two large tumors, the size of two men's fist, growing inside her brain - an aggressive form of cancer.

Over the past six months, the infant has battled several painful procedures.

Mikayla's mom, Krista, says it's the power of prayer that has pulled her daughter through.

"I thank God," said Krista. "I think of all the people that are praying for her. I think that's the main reason she made it through the surgery. She had a 50% chance and she made it."

The family is comforted by family, friends and Ronald's co-workers at the Gainesville Police Department. Fellow officers help cover Ronald's shifts when he's caring for Mikayla. The Alford's face tough expenses. Ronald is often limited in the number of hours he can work and the family faces a mortgage payment and the expensive cost of living in and out of hospital rooms.

As Mikayla continues aggressive chemotherapy treatments, the bills will only grow larger. Still the Alford's aren't giving up hope, because Mikayla isn't giving up, either.

"She's a trooper. She made it through it all and they didn't think she would, but she did. She's going to prove us all wrong."

The Alfords face a grim prognosis. Even with Mikayla's surgeries and treatments, she still faces a 50% chance of survival.

"Miracles for Mikayla" is happening Sunday, September 13th at Shooters, on Highway 82, just east of Gainesville. It starts at 3:30pm.

Tickets are 15 dollars for adults, 8 dollars for kids. Admission includes a catfish dinner and features live performances by three local bands and a silent auction.