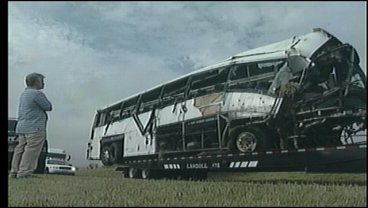 An update to last year's fatal bus crash in Sherman that killed 17 people: A drug test conducted on the driver found evidence of recent cocaine use.

According to documents prepared by the Sherman Police Department, test results show cocaine in a urine sample from the bus driver, Barrett Broussard. The national transportation safety board conducted the investigation.

Fifty-three-year-old Broussard hasn't been charged with a crime because the NTSB did not find evidence of cocaine in his blood.

However, the Houston man could face a fine from the federal motor carrier safety administration.

The bus was carrying 55 members of Houston's Vietnamese community to a Catholic conclave in Missouri when it crashed August 8th, 2008.

Authorities don't believe the cocaine contributed to the accident. They still blame that on a re-treaded tire and other safety violations with the bus company.