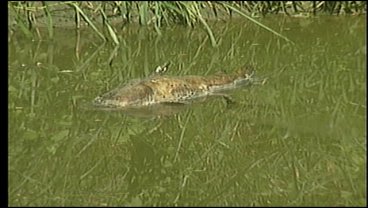 We told you Monday when we first reported the problem that this could have all been cased by natural causes. On Wednesday we found out that was the case.

Tests done by the Texas Commission on Environmental Quality show the fish died to a natural occurring process. There were low levels of dissolved oxygen in the water, which is often due to temperatures climbing and it getting hot outside. Stagnant water can also contribute to the process.

TCEQ officials say due to the fact that fish of all sizes were found dead, but some small minnows survived and other factors - they ruled out any toxic contaminants.