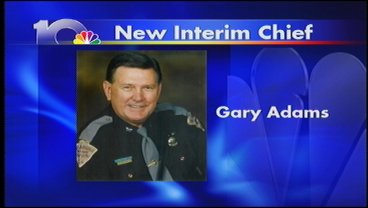 City leaders announced that they have found their Interim Police Chief to replace outgoing Police Chief David Leonardo in Ardmore. Michelle Gillespie reports. It's been a long two weeks for those involved with the City of Ardmore and the Ardmore Police Department with a lot of questions and accusations.
But today, city leaders hope they're on the path of pulling the department back together.
Gary Adams, a retired chief of the Oklahoma Highway Patrol, has been named the Interim Chief of the Ardmore Police Department, effective on September 1, a week from today. City Manager Dan Parrott said former Chief David Leonardo announced he was stepping down yesterday as police chief--Parrott began making calls to see who might be interested and Adams agreed to come out of retirement for the next six to nine months to act as Interim chief.
Parrott also says Ardmore City Commissioners are considering the creation of what's called a Citizen Oversight Committee before they appoint a new permanent police chief.
"They want to take about six to nine months to understand what the issues are, the pro's and cons, make some decisions and if that is going to happen, what form it will take place and once that's in place, then we'll start the recruitment for a new chief," says City Manager Dan Parrott.
Parrott says he chose someone outside of the Ardmore Police Department family hoping that person might provide an outside perspective in regards to the issues and concerns about the department.
Parrott met with new Interim Chief Adams in Norman today where he is currently living and that Adams is well aware of the controversy and issues surrounding the department but he is excited to join the force and help resolve some of those problems.
Michelle Gillespie, KTEN News.