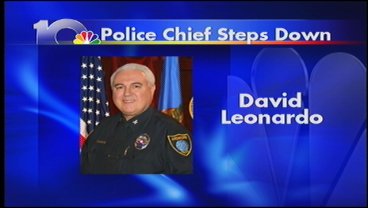 More news out of Ardmore, we were the first to break into programing this afternoon with word.
Ardmore Police Chief David Leonardo decided to step down and leave the department.
That's after nearly two weeks of turmoil within the Ardmore Police Dept.
First with the forced resignation of Deputy Chief Richard Ackerman.
Then numerous complaints from within the department of alleged favoritism, discipline issues and a general lowering of moral among officers.
Leonardo handed over a resignation letter to city manager Dan Parrott today.
In it he says he intends to retire in March of next year, we learned he will be on administrative leave until that time at the suggestion of the city manager.
We also learned late today, that the chief, and the city manager met over the weekend with a handfull of other officers along with a representative from human resources.
Dan Parrott said he had a feeling Leonardo would step down.
As of tonight, acting captain Ryan Honeycutt is now acting Police Chief in Ardmore.
He's one of four officers seen here standing in support of the chief. In this video from Friday's news conference called by the city when Mayor Martin Dyer threw his support behind Chief Leonardo and told us the city would re-hire the Berkshire Group to do another evaluation of the department
On Friday, when we talked to Chief Leonardo, he gave no indication of stepping down.
We've had no comment from Leonardo today, in fact, when we went to his office to speak to him, we weren't allowed anywhere near him and in fact, we were asked to leave the building.
Next step in replacing Chief Leonardo is to find an interim chief to fill the position until he retires in March, the city manager says they will look outside the department for that then they'll do an official search for a new police chief.
The police union within the Ardmore Police Department responded to today's announcement by saying they respect Leonardo's decision to step down.
But, they say there's still a lot of issues within the Department that need to be resolved. They'd like to be able to sit down and discuss those issues with city commissioners. We also asked members of the Fraternal Order of Police about a memorandum we received from the city manager in Ardmore today.
It's written by Chief Leonardo, he calls it a must read if you want to know the real facts of patrol deployment in Ardmore.
According to national standards, it says Ardmore should have on the average of one police officer on patrol for every 10,000 residents. Ardmore has about 25,000 in population meaning three officers.
He says, for the past week, they had an average of 5.3 officers on patrol at any time.
At no time during the past week did they have just two officers on patrol.
It goes on to say officers average less than one call per our per working hour on the street.
And Ardmore officers take on average less than three reports per working day.
The FOP says those numbers are not correct.
We also spoke with city commissioners today, Sheryl Ellis and Keith King opened up the doors to hear from citizens today. They stayed until 7 o'clock tonight getting input.
The overall consensus from those they spoke with--they want a resolution and to get the police department back on track with what's important and that's public safety.