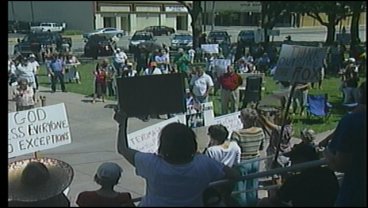 Dozens of passionate protesters gathered on the Grayson County courthouse lawn to hear from Congressman Ralph Hall on the issue.

The republican opposes certain democratic proposals that have been discussed. Protesters also heard from doctors and others opposed to the president's plan for change. Of course, several people were there to argue in favor of reform and just about everyone had an opinion.

"Many people just don't realize that we have health care for a great majority of the country," said Tony Beaverson. "They just don't understand how it really works."

There have been many inaccuracies reported surrounding the debate, which both sides are trying to eliminate and clarify. A good website to check out is www.factcheck.org. It's run by a non-partisan group.