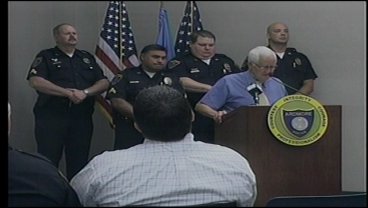 Ardmore Police officers react to the latest remarks by the city's Mayor Martin Dyer. The Mayor held an informal press conference Friday at noon, announcing he would be calling on the commission to agree to a review of the Berkshire Report - a 2007 independent review of the Ardmore Police Department.

The mayor wants to rehire the consulting group and let them take another look at the department. He hopes it will resolve issues between many in the department and the Chief, but the Fraternal Order of Police say it's not the Berkshire Report that needs addressing. It's their concerns.

A few city leaders, officers, spouses and a few within the law enforcement community gathered from the impromptu press conference.

Four officers stood behind the Mayor as he gave his remarks while off-duty officers stood in the back. Nothing new really came out of the meeting. The mayor already said on Tuesday he wanted to call on the Berkshire Advisory Group again, but city leaders said this was a way to formally announce it to the public.

While, a spokesperson for the FOP says there's no need to wait around for another study to be done.

"Let's just sit back, take it easy and give time to get the Berkshire group in here and find out what the facts really are," said Mayor Martin Dyer.

Officers may get a chance to address their concerns to commissioners. A number of them have asked employees within the department to give them a call in the next few days.

As for the consulting group, the mayor says the city manager is working on getting a proposal from the Berkshire Advisory group about how much it will cost and how long it will take for them to review the department again. It could be one to two weeks before they hear back.