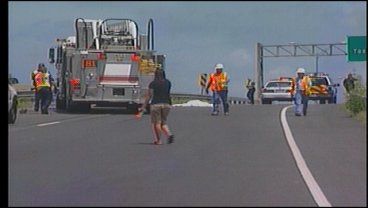 A deadly wreck Thursday, involving a motorcycle and a semi. Traffic was backed up for miles. And, now a truck driver behind bars.

It happened approximately 12:30 p.m. in the 500 Block of Highway 75 in the northbound lanes, right in front of Bearcat Stadium. According to police, the semi was driving in the right-hand lane, the motorcycle in the left lane near Pecan Street.

As they passed the on ramp, the semi changed to the left lane to get around oncoming vehicles.

The man driving the motorcycle, John David Cox, of Denison, swerved to avoid getting hit and instead was thrown from his bike into the guard rail.

"You know, you've always got to check your blind spots whenever you drive," says Sgt. Bruce Dawsey, of the Sherman Police Department. "The individual was moving over to the left hand lane, appears to have not seen the motorcycle, motorcycle was trying to get out of the way and struck the guard rail . And then, of course, wearing a helmet -- the driver in this incident was not wearing a helmet."

Officials say the man was not wearing a helmet.

The accident backed up traffic on Highway 75 for close to three hours.