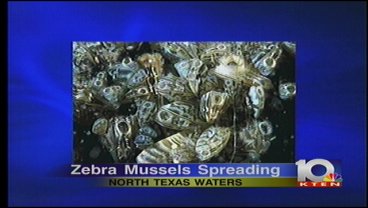 Zebra Mussels could soon be creating a big problem at our local lakes. In April the small critters were discovered on the hull of a boat at Lake Texoma. Officials now believe they are in the headwaters of Lake Lavon. KTEN's Katy Blakey has more.

"[It's] the fear of the unknown because we don't know much about zebra mussels," said Tim Hayes, operator of Highport Marina.

What we do know is Texas Parks and Wildlife officials are worried, which concerns Highport Marina and folks like Tim Hayes.

The small zebra mussels can clog water pipes, eat the food supply of fish, attach to boats and kill beach life with their razor-sharp edges. And they multiply at an alarming rate.

Native to the Black and Caspian Sea, they first invaded North America in the 1980s near the Great Lakes. And now, they are in North Texas, just not widespread - yet.

"As a marina operator, if a lake could become populated by zebra mussels, under my understanding they could attack the docks, the steel, the floatation," said Hayes. "They could attach themselves to the hulls of our boats."

Which is how they typically spread from lake to lake -- stuck to the hull of a boat.  Marina owners around Lake Texoma often monitor their own ramps, but not the public boat ramps.

Meaning a boater could visit the lake, and unknowingly, be carrying zebra mussels.

"If they come in and had zebra mussels up on their boat which was on a lake in the north or west and they were to pull into the lake there is no way of knowing if that zebra mussel is on that boat," said Hayes.

The big concern now is the mussels are spreading to other waters, including North Texas's largest drinking source, Lake Lavon, which supplies water to over one million people in the Dallas-Fort Worth area.

"We've had a lot of customers calling and asking about zebra mussels."

Lake officials are urging boaters and visitors to prevent the spread, as well. Here are some prevention tips boaters can take:

Tim Hayes hopes this problem can be stopped before it cripples the lake's busy summer season.

"It hasn't been a big issue for us and we're hoping it isn't in the future."