"Over the Limit, Under Arrest Campaign" in Oklahoma - KTEN.com - Texoma news, weather and sports

"Over the Limit, Under Arrest Campaign" in Oklahoma 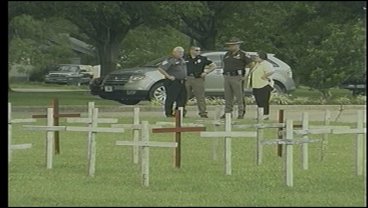 Madill is cracking down on drunk drivers with a new campaign called "Over the Limit under Arrest", but the Madill Police Department isn't the only department hitting the campaign trail, almost every South Eastern Oklahoma police department is joining the force.

Madill hosted the campaign kickoff with a meeting involving police departments from over the South Eastern area to discuss their plan of attack to crack down on drunk driving.  The campaign officially begins August 21, 2009, so you can expect to see more officers patrolling the roads.

In, Oklahoma, officers say statics for alcohol related accidents have declined over the years but even one alcohol related death is one too many.  To help spread the message throughout Oklahoma, officers will not only increase patrol but are setting up crosses in Madill to represent the recent statistics of those who died in alcohol related crashes.  There are 56 crosses total, 7 of which are colored red representing those who have died in these preventable accidents.  A strong, visible reminder to the public not to drink and drive.

A few statistics to sober you up, in 2007, police arrested over 1.5 million people in DUI related incidents.  32% of all motor vehicle crash fatalities are alcohol related.  Those most likely to drink and drive are men ages 21 to 34 years old.

The campaign will start August 21st and run through September 7, 2009.