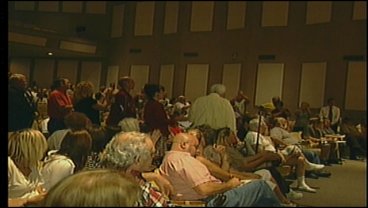 As town hall meetings continue to sweep the Nation, residents in Oklahoma had their chance to voice their concerns to U.S. Congressman Dan Boren in town halls hosted in McAlester, Muskogee, and Pryor.

Both sides of the aisle, Republican and Democrat, were concerned over Washington's various ideas of reform.   Minnie Turnbow voiced her opinion saying, "It's concerning to me the government is stepping into everything", while Michael Ridley agreed saying, "I have some concerns in the direction of our government."  Mark Wood, was also concerned with government proposed ideas stating, "I am scared to death their starting to trod on our constitution just a little to much."

And while Republicans and Democrats tend to disagree on most political issues, the two parties in Oklahoma are in agreement over two things, fear for to much government control and the idea, some type of reform is necessary, but the current proposed bills needed more work.

Oklahoma residents cried out to Congressman Boren to lobby on their behalf in Washington to help slow down the Government's decisions in all areas, specifically in healthcare.  Boren says he is not fully in favor of the Healthcare bill as it stands, and he is waiting for a new version of the bill.   He addressed the audience stating he believed "a bipartisan consensus will come out of the Senate and I am going to wait, I am going to read it, and I'm going to see it."

In Washington the story may be different but to Oklahoma's relief Congressman Dan Boren is taking time to deliberate over the reform bills as he told the audience at the town hall, "I actually read the bill".  But the Congressman says "no bill is perfect, but says some items inside many of the bills are necessary."  "There's an old saying, don't let perfect get in the way of good," says Dan Boren.  The comment blurred the line his decision to vote for the bill if it did not change.

The reform movement has American standing up, voicing their opinions, studying and keeping their eyes on government proposals.  And as the whirlwind of reform continues, many across the many still remain skeptical of the ideas proposed in Washington.