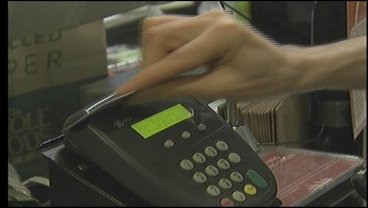 Under the new rule, credit card companies must send bills 21 days in advance.

They have to notify a customer 45 days before raising rates. But, customers can decline the new rate and pay off existing balances under the old rate.

This is just a first round of protections.  Additional changes will take place February 2010.

And, have you seen this? A sign at one local gas station that reads: "Neighbors and friends, both of us are impacted by high credit card fees. Please sign our in-store petition."

It's basically taking a stand against what's called an interchange fee. Meaning, when you swipe your credit or debit card, Visa and Master Card collect a percentage of each transaction from retailers.

According to one consumer advocate Web site, "nearly $2 out of every $100 American consumers spend using credit cards goes directly to the credit card industry through the interchange fee."

Even consumers who don't use plastic pay more through higher prices.

"I'm from the old school," says Dub Seargant, who was out buying gas. "I really don't use a credit card that much, I don't believe in them. They're nice to have in an emergency, I think. But, as far as gas, I always try to pay cash for it."

You can also sign the petition on-line, by clicking here.