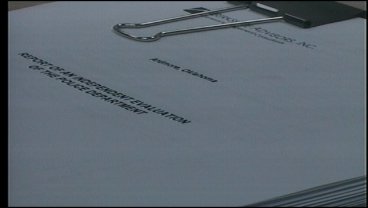 In light of recent turmoil within the Ardmore Police Department, Mayor Martin Dyer is calling on a consulting group to revisit a 2007 study on the department.

The "Berkshire Report" outlines policy recommendations and it's been the guide for Police Chief David Leonardo since he was hired in 2007.

The report gives a scathing review of the Ardmore Police Department and recommends widespread changes.

The Chief says city leaders charged him with the task of cleaning up the department. According to the 195-page report, the Ardmore PD "had lost it's way." Officers were not being held accountable. Morale was at an all-time low and internal conflicts were spilling over, affecting the quality of service to the city.

Chief Leonardo told KTEN it was this report that city leaders handed him and told him to implement. And, he say, it's the resistance of those employees who don't want to change and be held accountable that are causing problems.

"We're working on our morale problems," said Chief David Leonardo. "From my military experience, the units with the best morale are those with the best discipline. We have got to get past this lack of accountability and lack of responsibility and unwillingness to do what we're suppose to do. Once we get past that, I think we're going to see a major turnaround."

The chief believes the recommendations made by the Berkshire Group are necessary to run an efficient department. He says he's already re-structured the office and re-written policies, which were two big recommendations, but he says, there is still a long way to go.

Of course, many sources inside the police department say his changes are not effective and not benefiting the department. Instead, they are hurting and morale is at an all-time low.