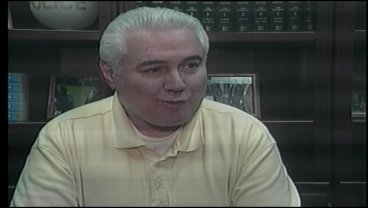 Monday night, Police Chief David Leonardo spoke out for the first time since all of this became the talk of the town in Ardmore.

Remember, we told you last week, the chief told KTEN point blank on the phone, it was a complete surprise to get Ackerman's resignation, and he hadn't even thought about what he would do to replace him.

The next day, Ackerman said he was handed a termination letter by Leonardo. And, since then, no response from the chief of police.

It was a packed house at Monday evening's Ardmore commissioner meeting. One item of interest not on the agenda though, discussion regarding recent turnover and morale at the Ardmore police department. And, no place for public comment on the matter, either.

For the past two years, the Ardmore Police Department has been undergoing a major transformation. That's largely in part because of what's called the Berkshire report. It's a document made up by a private group, which surveyed the force and made recommendations, later approved by city officials.

"That was one of the reasons I was hired -- to come in here and help make changes and reforms and modernize the police department," says Chief David Leonardo.

"Any time you have lots of changes, that's going to cause some tension, and I imagine that it has," says Commissioner Keith King.

So, a lot of those recent changes within the department -- changes, some say are unsettling.

The standard Chief Leonardo goes by is one unit patrolling the streets for every 10,000 people.

"We're a town of 25,00 people," says Chief Leonardo. "And, by that standard, we would have three vehicles at any one time and according to our schedules, we're putting out 3,4,5,6 sometimes as high as 9 or 10. So, we're always providing what I consider adequate safety and security out there."

According to Chief Leonardo, sometimes there are only two or three officers on the street at one time. He says, when that is the case though, one of the units is supplemented by a corporal or sergeant or captain.

He says as of now there are 9 openings, the force gave three job offers last week and are currently processing 12 other candidates for open positions.