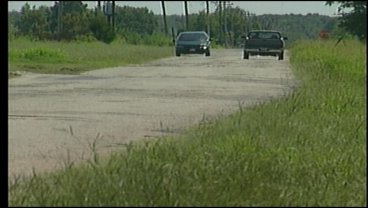 Leavenworth Trail connects Highway 70 to Highway 69/75 and for years, drivers have dealt with numerous potholes up and down the road. Recently, construction crews began repaving part of the road. KTEN's Katy Blakey explains why some drivers are questioning those repairs.

It's your typical, two-lane county road, but it comes with a big problem.

"There are potholes, dips, bumps all along the road."

"I have a 17-year-old daughter who gets car sick just because we're trying to avoid as many of the potholes as we can."

Karen Hardy is one of the many who takes the road to trim her travel time. It cuts eight miles out of her commute to work and lowers her cost spent on gas.

"It's something I have to do on a daily basis because I work in between Denison and Sherman," said Hardy. "It's just maddening."

Frustration turned to disbelief when Hardy noticed construction crews repaving the smoothest stretch of the road.

"We were very frustrated. We contacted the county commissioners office then and thought it had to be a mistake."

But it wasn't a mistake. County leaders say the money just wasn't there to pave the entire road.

"It takes money and in order to get money, it takes time to get money," said Bryan County Commissioner Monty Montgomery.

A former commissioner applied four years ago for a million dollar federal grant to repave the road. But, four years later, when the grant was finally approved, the million dollars didn't go as far. The current repaving project has already cost $1.6 million. Former leaders decided the first place to began repairs would be on the west side of the road.

"We will get it done, it'll just take time," said Montgomery.

But for the Hardy family that four years is going to be a long, and a bumpy ride.

Commissioner Monty Montgomery says they just don't have the money to pave the county's most traveled road, and it could be another 3 to 4 years until it is repaired.