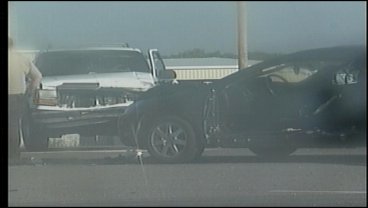 The accident happened around 8:30 this morning on Highway 70 and Silo in Durant.  Witnesses say a man turning left onto 70 from Silo Road was not paying attention and pulled out in front of another vehicle carrying a mother and her toddler.  Witnesses say there was no time to stop and the two vehicles t-boned.

The woman's car was totalled, the door ripped clean off.  The good news is both the woman and the toddler are in good condition.  Officals say both the mother and toddler were buckled up.

Officers on scene say the toddler was in a carseat behind the driver and that may have been what saved his life.

The man was pinned inside his car and had to be assisted out of the vehicle.  He was careflighted to the Medical Center of Plano by Lifestar One.  The woman was taken by ambulance to MCSO.  All three are said to be doing fine at this time.

While officals were on scene at this accident another accident happened off Lone Oak Road.  Officers say a woman fell asleep at the wheel and veered off the road.  The woman was unharmed.