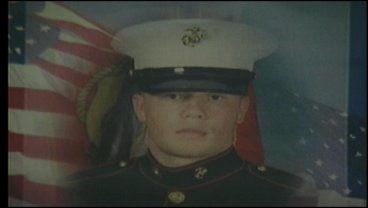 In Lamar County Saturday, a Paris marine was laid to rest. KTEN's Jhen Kordela takes a look at the impact Sgt. Jay Hoskins had on his community -- a place where, just less than a month ago, citizens were divided in protests. Now, they've came together, as one.

But, less than a month later, it's a different story.

Sgt. Jay Hoskins, of Paris, was killed August 6th, by a roadside bomb in Afghanistan.

"He died for our country, and I'm a retired veteran myself," says Joe Clayton, who attended the funeral. "And, I can understand all this."

Since then, residents have united in support for the hometown hero -- a person who encompassed their values in fighting for our country.

"This is honestly what Paris is about -- it's the community coming together," says Joanie Moore, who volunteered as part of a community organization to line the street with American flags.

According to those who knew him, Hoskins was a role model in a community that values faith, family and football.

He played Varsity Football for three years at North Lamar.

"I can remember him playing football and being in a lot of activities and having a lot of enthusiasm," says Superintendent James Dawson.

Adds Hoskin's former Football Coach Tommy Felty: "He was on the team that made the playoffs for the first time in 20-something years here at North Lamar. So, it was a part of his leadership that allowed us to overcome that deficit for so long."

That was the start of a tradition that lead the panthers to the playoffs for the last six out of seven years.

So, while grief is still raw for Hoskin's wife, young son and other family members, the community is mourning with them.

Adds Felty: "It was horrible. I was devastated. I was lost for words and feelings. I know he made  the ultimate sacrifice for our country, and he was the guy at night that made us sleep better knowing he was over there protecting us."

And, his legacy will live on.