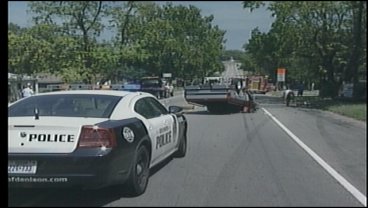 It happened along East Main Street, just east of downtown Denison. Police told KTEN a 16-year-old driver in a Ford pick-up was traveling eastbound when he crossed the center line striking an oncoming Dodge pick-up.

The two people inside the Dodge truck, along with the 16-year-old, were taken to TMC. No word on their injuries, but police did not believe them to be life-threatening.

Neighbors say they've watched dozens of accidents happen at this location over the years.

"It's time for something to be done on this street to stop it or it's gonna be worse than what it was today," said Margo Smith.

The 16-year-old was issued a ticket for failing to stay in his lane, but police are not sure what caused him to veer into oncoming traffic.