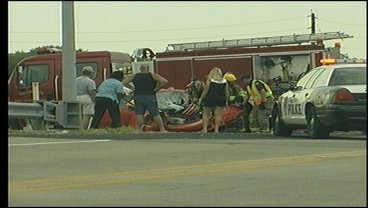 We have an update to a story that was breaking news at five, what turned out to be a fatal accident in Denison.

According to the fire department, Webster was headed the wrong way.  He was going north in the southbound service road of Highway 75.  Just as a pickup went to turn onto the highway from westbound 84, the two vehicles hit head on.

The female driver of the pickup was okay, walking around at the scene.

Authorities had to extricate Webster from his vehicle.  They called an air ambulance for him, but he was instead taken to TMC, where he was pronounced dead at 5:01 p.m.