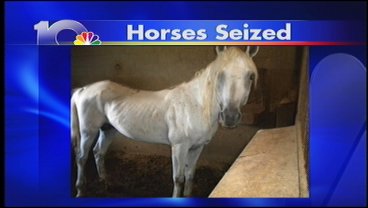 A gruesome story out of the Pilot Point area of Denton County. Animal control officers seized 76 emaciated Arabian horses from an equestrian farm there.

According to the Denton County Sheriff's Office, the horses were moved to a nearby ranch after they were found in various stages of starvation. That's despite bales of high-quality hay on the property.

Deputies, who were acting on an anonymous tip, found stalls filthy with feces and urine. The sheriff even referred to the farm as a "concentration camp for horses."

The owner, Gordon Dennis Key, will likely face charges for cruelty to livestock.