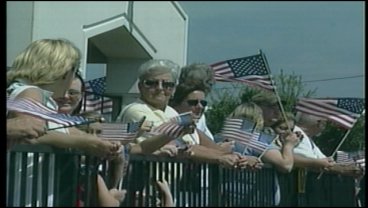 A fallen hero returns to Texoma and thousands of people turn out to pay their respects. KTEN's Katy Blakey reports.

Sgt. Jay Hoskins of Paris was killed last week in Afghanistan. On Thursday, his remains returned to Lamar County.

The town of Paris has been touched by tragedy in the past. The death of one man has caused division in the community. Just a few weeks ago, dozens of people were protesting in the streets. On Thursday, thousands came together - honoring one of their own.

With heavy hearts thousands turned out to pay tribute to Sgt. Jay M. Hoskins. As his flag-draped casket was lowered from a charter plane, residents bowed their heads or raised their hands to salute.

"It goes to show you the love we have for each other," said Paris resident Denis Frank. "I didn't personally know this man, but he represented me and my family and all of us."

The young marine was killed by a mortar blast last week in Afghanistan. He leaves behind a wife, young son and another child due in January - a grieving family that was comforted by a crowd of strangers.

"It's an honor to pay tribute to someone who gave their life for this country," said Kim Knox, another resident who stood in support.

A former standout on the football field today, Thursday coaches and players from across Lamar County lined the streets to pay tribute to the sacrifice this teammate made.

"He had a lot of courage," said North Lamar coach Tommy Felty, who coached Hoskins on the football field. "He was tough and he had a million dollar smile."

In the past year the death of one young man seemed to divide this community, drawing national attention from radical groups bent on driving people apart. Most Paris residents will tell you that what unites them is far greater and that the death of another young man has brought them closer.

"We have a great community," said Coach Felty. "We've gotten a bad rap, but we take care of each other."