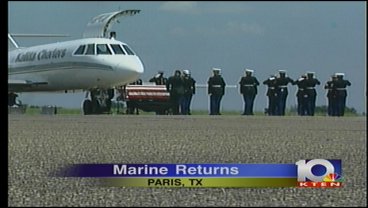 It has been an emotional day in Lamar County where thousands of people turned out to pay tribute to a fallen hero. The body of Sgt. Jay Hoskins returned home to Paris Thursday. The Paris native and marine was killed by a mortar blast in Afghanistan last week. KTEN's Katy Blakey has more.

An entire community came together to pay their respects to Sgt. Hoskins. Family, friends and children, veterans and mostly strangers lined the streets of Paris.

It was an emotional scene as the wife and family of Sgt. Jay Hoskins greeted a charter plane carrying the body of their loved one. A few yards away strangers, most carrying American flags stood silently. Some were praying, others were crying as Paris' first casualty in the Middle East returned.

From the airport, the procession traveled several miles into the heart of Paris where more than 500 flags lined the route. And thousands more saluted the marine and his family.

"It's an honor to pay tribute to someone who gave their life for their country," said Kim Knox, who came from Brookston to stand in support.

Residents say this was all about coming together and showing their support for Sgt. Hoskins family. The marine leaves behind his wife, a young son and another child expected to be born in January.