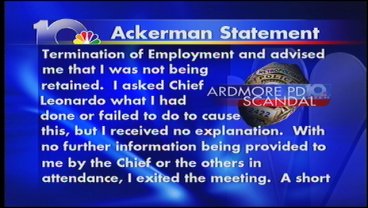 KTEN was the first to break the news Tuesday night -- Richard Ackerman did not just "resign" his position as the new Deputy Police Chief in Ardmore.  Instead, we learned from multiple sources on Tuesday, he was terminated with the option to submit his resignation.  Thursday, Ackerman himself confirmed it all.  Meredith Saldana has been following this story and has more.

He said it was time to defend his own reputation and integrity and he decided to explain exactly what happened.

Richard Ackerman hand delivered the statement to our studio in Ardmore.

In it he confirms everything our sources told us days ago.

That he didn't just resign and like he told us last night, he had no plans on leaving Ardmore.

According to Ackerman's written statement "On Tuesday morning August 11th, 2009, shortly after 9:00 AM, I went for a pre-scheduled meeting with Chief Leonardo.  I was met by Chief Leonardo, the Director of Human Resources and the Assistant City Manager."

He goes on to say, "Once I was seated, Chief Leonardo handed me a letter entitled 'Termination of Employment' and advised me that I was not being retained.  I asked Chief Leonardo what I had done or failed to do to cause this, but I received no explanation."

Ackerman goes on to say, a short time later, Chief Leonardo asked him how he would like the separation to be documented.

Ackerman said he never anticipated the turmoil and the questions that have been asked about his departure.

Thursday, we physically sat in front of Chief Leonardo's office trying to get a comment.

After about an hour, his secretary received a  phone call from Public Information Officer Robin Beal and we were told the chief and Beal were  "working in the field" and might not be back for several hours.

At 4:30 Thursday afternoon -- after multiple attempts to get a comment from Chief Leonardo and Public Information Officer Robin Beal, we finally received this fax.

It's a copy of Ackerman's resignation letter and it does indeed say, "I have made the difficult decision due to personal reasons."