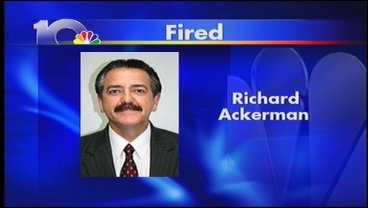 More questions than answers within the Ardmore Police Department, specifically over what happened with their new Deputy Police chief, Richard Ackerman, who had only been on the job for 65 days.
We told you earlier today, he "resigned" from the force Tuesday.
But now, multiple KTEN sources confirmed he did not just "resign".
Our sources tell us, Ackerman was told Tuesday morning at 9 o'clock  that his services would not be retained and he could either resign or be terminated.
Ackerman chose to resign.
As of Tuesday night, Ackerman was still on the city's website--more than 12 hours after he "resigned". Officials with the police department could not be reached. Earlier today, Police Chief David Leonardo said Ackerman resigned for personal reasons.
When asked if Ackerman gave two weeks notice, Chief Leonardo said no, that he cleaned out his office Tuesday afternoon.
When asked what they're going to do to replace Ackerman, he said, it was a complete surprise to him and he hadn't even thought about it. City manager, Dan Parrot is out of town this week so no official comment from the city other than that.