Why Filing for Unemployment Takes Time 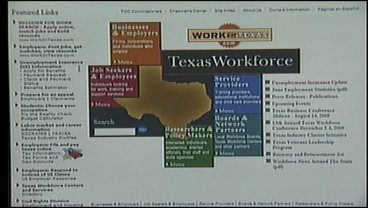 Recently we received emails from viewers asking why it takes so long to process an unemployment claim.  Deeda Payton did some digging and found a few different circumstances that are known to put more time between you and an unemployment check.

If you have been laid off, you can expect a smoother unemployment process than if you were terminated or quit. The Texas Workforce Commission says the burden of proof policy that is placed on the employer or employee in those circumstances can lengthen the process.

"Thank you for calling the Texas Workforce Commission. We can't take your call right now." That's where the process for filing an unemployment claim begins, a frustrating start to a lengthy process for many. "It boggles my mind; I don't understand why it takes so long."

The Texas Workforce Commission says their call volume has doubled if not tripled in recent months. In response, they have added about 300 additional receptionists, and still there are people on hold. But, you can apply online and some people say it's a faster process. "It's been easy really; all you have to do is get on the Internet and file every Sunday."

Bradley Shoemake has been receiving unemployment benefits for almost a year now.  Last August he was laid off from a manufacturing plant. "Yea I was kinda scared.  I didn't know what I was going to do, but I see really how easy the process was, and it's been pretty descent all along."

But, that is not the case for everyone. "I filed online and I thought it'd be a pretty quick process." Tabetha Snow was fired from a local newspaper two months ago and has still not received a check. "I thought if you were fired you were approved because you lost your job.  I didn't know that if you were fired with cause you don't get unemployment."  However, Snow was denied benefits because her employer did claim they had cause to terminate her.  Now she and her two daughters live off her husband's paycheck.  "That's really hard to live on especially when I'm not getting unemployment and I can't find a job."

Snow says she is appealing the decision, and in the meantime praying that her family will have enough money to put food on the table and stay in their home.

For others hanging on the line, they're just waiting for a human voice.  A wait that TWC says is just another example of hard times across the country.

Once a benefit request is filed, TWC says it takes about 21 days to process.  It usually takes about month to receive the first check, if approved.