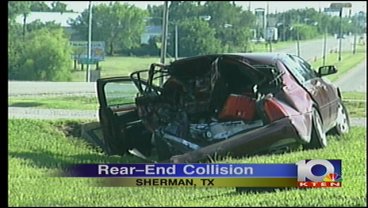 A 90-year-old couple is recovering Saturday after being involved in a rear-end collision.

This accident happened at the intersection of Texoma Parkway and Woodlake Rd around 5pm Saturday. Witnesses say the light had just turned green and the couple, driving a maroon sedan, began to move forward when a gray pick-up truck slammed into the back of the car.

Witnesses say the truck was probably going around 50 miles per hour. The impact caused the truck to flip. The driver of the truck was taken to TMC with head injuries.

The couple was taken to Wilson N. Jones with non-life threatening injuries.