Debris, Not Tire May Have Caused Deadly Sherman Bus Crash 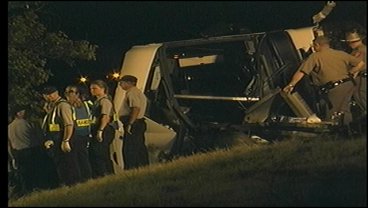 Today marks one year since a deadly bus crash in Sherman claimed the lives of 17 people. Authorities now believe it was not a retreaded tire that caused the crash, but rather debris on the road.

It was on this day that a charter bus carrying a group of Vietnamese-Americans from Houston to Carthage, Missouri crashed on Highway 75. A preliminary report showed that a retreaded front tire came apart and caused the vehicle to lose control.

At the time of the accident, the charter bus company involved had not been approved by the Federal Motor Carrier Safety Administration. The owner is now facing several civil lawsuits.

A federal investigation into the crash is expected to be complete in the next few months. After it's complete, the bus company could face federal charges.