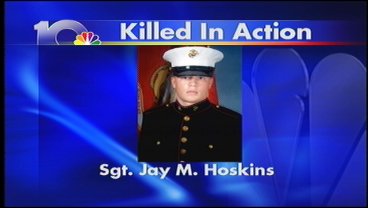 A Paris, Texas marine is killed in Afghanistan.

Sgt. Jay M. Hoskins, 24, was killed in Afghanistan by a roadside bomb while supporting combat operations in the Farah province.

Sgt. Hoskins graduated from North Lamar High School in 2003. He joined the Marine Corps in August of that year. Hoskins was on his third tour and a decorated war hero.

Two other Hawaii-based marines were killed during the incident. The three riflemen were assigned to the 2nd battalion and were part of the latest troop surge to Afghanistan.

Hoskin leaves behind his wife, a son and a second child expected to be born in January.