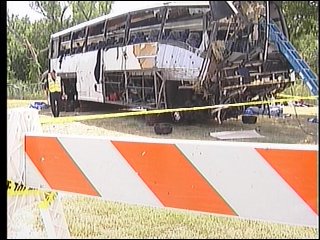 Saturday will mark one year since one of the worst motor coach crashes in history. A charter bus carrying a group of Vietnamese-Americans on their way from Houston to Carthage, Missouri swerved off Highway 75, crashing on to it's side, killing 17 people and injuring dozens. KTEN's Katy Blakey has a closer look at what's happened during the past year.

"I think the overwhelming thing I remember was the number of people in the community who pulled together to help people who weren't even from Grayson County," said Sharon Watson, Director of the Texoma chapter of the Red Cross.

"There's been a lot of improvements," said Watson. "A lot of lessons learned from this."

The Sherman Fire Department has outfitted a mass casualty trailer. It will be brought to any major disaster site in the future. It's filled with crucial tools to handle an emergency with multiple injuries.

While things have changed locally, they've also changed on the national level. The federal government is reviewing the way it regulates the motor coach industry.

Texoma Tours, a local charter busy company, has noticed the changes on the road.

"Being that we're coming up on the anniversary of the bus crash, the enforcement of inspections out on the road has stepped up in the last year," said Mike Sellers, co-owner of the company. "We've had several inspections in our area."

A federal investigation into the accident remains unfinished. A preliminary report says a re-treaded tire caused the crash - a violation of federal safety standards. But Sherman Police say they now believe debris on the roadway may have caused the crash. The bus was also owned by a "rogue" charter company - a business that may have skirted paying fines by opening up a new company.

Now government leaders are calling on the federal agency charged with regulating bus companies to step up their enforcement.

"I'm glad to see it's going on, because it may keep some of those situations from going on again," said Sellers.

But a year later, the government and the transportation industry say there's still a lot of unanswered questions about why the bus was on the road and why it took the lives of 17 people to prompt changes.