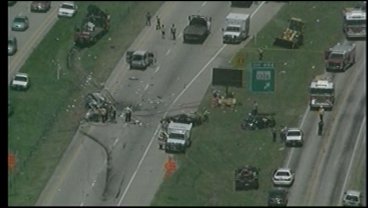 According to Texas DPS, a semi slammed into an SUV as it entered the construction zone South of Gainesville. It caused a chain reaction wreck that killed 63-year-old Gervious Dale Hinkle, and his 13-year-old grandson Casey.

The survivor in that suv, the teenagers mother, Melissa Hinkle is still recovering from her injuries, but she's also grieving the loss of her family. She filed a wrongful death lawsuit against five parties.  Including the trucks driver, the company he worked for and the Texas Department of Transportation.

Kten's Vanessa Bolano spoke with her sister and their attorney.

We asked to speak with Melissa Hinkle about the wreck and the lawsuit, but even though her visible injuries are fading, her sister told us the emotional damage she suffered from losing her only son, and her father may never heal. Now the family just wants to keep anything like this from happening to anyone else.

Five people have been killed in 30 days on a stretch of I-35 just South of Gainesville.

In one wreck, over July 4th weekend, 13-year-old Casey Hinkle and his grandfather Gervious Dale Hinkle died when an 18-wheeler slammed into their SUV after they had slowed down for traffic in a construction zone.

Casey's mother, Melissa Hinkle was also in the vehicle. She spent 5 days in ICU and now stays over night in her sister's house.

Kimberly Minnick, Hinkle's sister, says, "She lived with her dad and son for years and years and all of a sudden they're ripped away from you. My nephew was killed, he was 13 years old, going into 8th grade, a football player. He had the rest of his life ahead of him."

As if the sudden tragedy hadn't been enough, the family had to relive the moment weeks later.

"My nephew was killed, my stepfather was killed, Melissa's whole family was taken away from her and then all of a sudden it happens like three weeks later to another family."

On Monday, only four miles from the Hinkle fatality, three more people died on I-35 when another semi failed to slow down in the same construction zone. Now Hinkle has flied a wrongful death lawsuit against five defendants including the truck driver, Randy Rrume, the trucking company, KKM Construction, which has a contract with txdot to repair the interstate, and TxDOT.

Attorney Steven Laird says, "What makes it so tragic is that it was preventable."

Laird says TxDOT didn't have an adequate safety traffic control plan in place which allowed for these accidents to happen.

Minnick says, "Now 5 people are dead and I don't know what their doing if they're going to close that road or keep it open."

We contacted TxDOT, they say they cannot comment on pending litigation, but they do say the stretch of I-35 is still narrowed to one lane. As for that construction, the contractor told us weeks ago they planned to be finished this past Monday, but they weren't. That's the same day three people died in that fiery wreck.

As of Friday, the construction is not finished. TxDOT is now fining the company $400 a day until it is done. They hope to have that stretch of I-35 cleared by the end of the month.