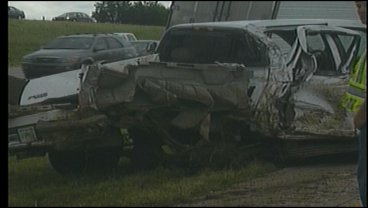 We have an update on a chain reaction wreck on I 35 that occurred a month ago. Now, a family's fighting back.

The incident happened July 5th, south of Gainesville. The Department of Public Safety says a semi slammed into an SUV, as the traffic narrowed to one lane in a construction zone.

In that SUV, 63-year-old Gervious Dale Hinkle and his 13-year-old grandson, Casey, died.

Now, the teenager's mother, Melissa Hinkle, has filed a wrongful death lawsuit against the semi driver, Randy Crume, the company he worked for, Texas DPS and with the construction company working that stretch of I 35.

"Melissa was seriously injured, and it was a tragic, senseless loss that should never have occurred," says Steven Laird, attorney. "The family is very interested in trying to get something done so that no further collisions, no further fatalities, no further injuries happen in this very congested area"

Of course, just this week, only four miles from the Hinkle fatality, two more people died on I 35 when a straight truck reportedly didn't slow down, easing into the same construction zone.

Still no word on charges, or a final investigation, in that case.