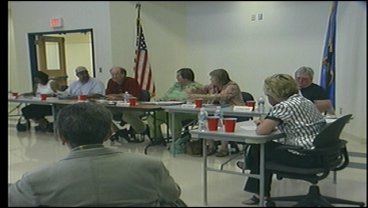 Voters in Ardmore will get to decide a $2.9 million bond issue.
Michelle Gillespie reports that the Ardmore School Board approved putting the issue on the ballot on Thursday night.

We've told you about this before--it would give the Ardmore City School District money they say they're in desperate need of, but at what cost to taxpayers? Here's the deal, if the bond issue passes this fall, the amount Ardmore residents pay in property taxes each year would increase about 15 percent.
So if you pay about $500 in property taxes in one year, your monthly increase in taxes would be a little over six dollars a month--or an increase of about $75 a year and that is money Ardmore schools' superintendent Ruth Ann Carr says the school district is in desperate need of.
For the past four years, the district has been using money from what's called their "General Fund", basically that is their state funding.

They've used that "General Fund" money to pay for maintenance and general upkeep as well as transportation but that's not what it's meant for, it's been used at the expense of teacher's salaries and school curriculum. "One bus probably equals the salary of two teachers so when we buy a bus out of the General Fund that means we have fewer teachers. It's just that simple," says Dr. Carr.

Here's a breakdown of where the bond money would go, if it's approved: $810,000 would go toward replacing nine school buses, as some are at least 15 to 16 years old. $750,000 would go toward replacing and upgrading technology and computers and another $400,000 would allow for new textbooks and library books. The rest of that money would pay for smaller things like new band uniforms and instruments, athletic equipment, new carpeting and a new basketball court for the middle school.

Dr. Carr did say that actually the majority of school districts in Oklahoma, use bond issues for school maintenance and transportation and because state funding this year has remained flat, while expenses continue to increase, the school board is focusing all of their efforts on getting this bond to pass when it goes to a vote on October 13th.