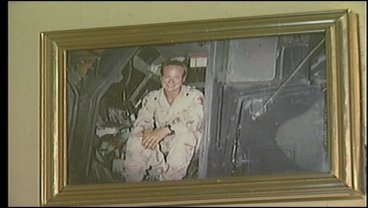 It's a casualty of war - Families separated by thousands of miles. One parent left to run the house and the kids, while the other fights overseas. One local military family is keeping it together one day at a time.

The Reyna family's story is like a lot of other returning veterans, one that is becoming far too common. These Americans put their lives on the line in Iraq and Afghanistan. And when they come back, they find it tough to make ends meet on government pay and benefits.

"Both my husband and I, all we've ever wanted was to do something for our country. I wanted to make sure my kids had the same freedom I had."

Dyana Reyna and her husband Jose have sacrificed more than most Americans ever will. She's a wounded veteran, who was severely hurt by a mortar blast while working on a truck in Iraq. Jose's a Denison police officer and Army Specialist. He was wounded twice on his first tour and now he's back in Iraq on his second tour as a roof gunner on a Humvee.

"It's hard on me physically and emotionally on the kids," said Dyana. "With the kids being older it's tough. Joe has to stand up and be the man."

Her oldest child is a big help around the house, but all four kids take on extra responsibilities cooking, cleaning and caring for their mother who is still recovering from breaking her back.

Soon after the Reyna family moved into their new home things began to fall apart. The roof is caving in, rafters are rotting and every time there's a storm rainwater floods the house.

"On a budget it's kind of hard to do anything."

Hard for anyone to handle, but especially tough for a wounded mother trying to raise a family of four alone while her husband is fighting overseas. The local VA and her church have stepped in to help, but still there's only so much they can do.

"They have sacrificed more than most Americans ever will," said Mike Hathaway. "And we need the community to step up and ask what can we do to help them be taken care?"

Friends say the family is in desperate need of a new roof and a new elevator. The one in the home is unreliable. And due to Dyana's injuries it's the only way she can get from the bottom floor to the top.

A fund has been set up at American Bank of Texas, so that anyone can help the Reyna family. It's in Dyana Reyna's name. Donations can be made at any of the bank's North Texas branches.