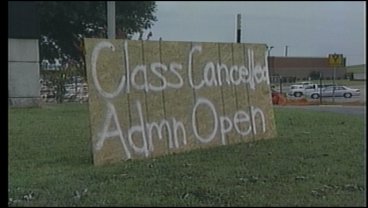 As of Thursday at 5pm, still no power to most of the buildings at Grayson County College. Administrators say no classes are scheduled for Friday, but those wanting to register for classes this fall can still register at GCC.

Everything is expected to be back to normal on Monday.

Most of the damage happened on the East side of the campus to the old criminal justice building that now houses campus police. There were two officers inside when the storm hit, but they were not injured.

Administrators say few students were on campus when the storm hit, but those who were here feared the worst.

Gregg Miles, Director of Student Life says, "I had a student who was locking up our facility and he was inside when the storm hit. He called me and said th weather was pretty bad, thought a tornado had come and he was in the restroom seeking shelter."

The wireless Internet is expected to be down for the next couple of weeks.

About 600 students enrolled in summer B classes were asked to stay home on Thursday.

Fall classes are scheduled to begin here on August 24th and so far that date has not been pushed back.